I gave the first podcast a 000 index because it's kind of like the origin story. With this one, I'm just getting into the swing of things with my first real podcast. This whole coronavirus thing is what got me to set up the recording software and get serious.

Speaking of serious, be sure that you're subscribed on YouTube.

The Return of The 8Bit Cubist Podcast

I was a podcast OG. Mostly thanks to Raph and Marcellus back in the late 00s. I didn't worry too much about recording my shit talking though. But between, myself, Raph, Jeff, Ryan, Theo, Marcellus, Josh, and a few others, there was always good shit-talking to be done. We found that out after bonding over video games, SoCal, and the San Diego Comic Con.

Come to think of it, we were all from vastly different places. That's probably why it was so unique.

The current version of The 8Bit Cubist podcast is a direct extension my art and a complement to it as well. That is, it's an individual exploration of life viewed through the lens of a game.


Also, I'd definitely appreciate it if you could subscribe on YouTube so I can prove to the algorithm that I'm worth it. You know how that goes.

My Last Art Show Before The CoronaVirus Shutdown 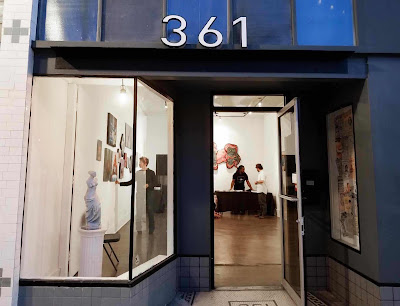 Me talking shop and getting ready for the WAM! 2020 Art Show in San Pedro, CA.

Just last week, things seemed calm, but I felt excited to be hosting my first show for Uppish Media. "WAM 2020: A Women's Appreciation Month Show" would feature fresh local artists and introduce San Pedro to a new vibe I wanted to develop. I was at home grabbing the last of my things: Moleskine guest book, Bose speaker, and of course, my Germ-X hand sanitizer. I headed to my car. On the way outside, I saw my neighbor. He mentioned that he would be traveling to Florida for a week. Good for him. I asked if he was nervous about Covid-19. He said "Heh, a little bit." I wished him well.

Later on at the gallery, guests were streaming in, taking pictures, and studying all the artwork on the wall. Everyone was tantalized with the art we'd collected. While news of Coronavirus was spreading, the Long Beach and San Pedro areas hadn't been hit yet. Even so, I requested that elbow bumps, fist bumps, and the Wakanda salute (or some other air greeting) be used. Handshakes and hugs were given out sparingly. Most people had fun with elbow bumps, and I think it even worked as a fun icebreaker. Someone was talking about a friend of a friend that knew somebody that tested positive in SoCal. Hmmm...mild phobias and denials were spreading faster than Covid-19.

In terms of news, the virus had gone viral.

A couple hours into the show, I noticed an overly friendly dog was licking a girl's face and splattering her with dog saliva. I winced at the copious amounts of slob being administered but smiled at the fun they seemed to be having. In the back of my head, I wondered if dog slobber could pass the virus on. After regaining my art show pokerface, I went back to talking to our guests.

As the night went on, I was getting reports of how some of the galleries were closed and not as many people were out and about. We had a good flow of people happy to be out of the house, so I couldn't get a good read on the general neighborhood sentiment.

The night finished and I thanked all the artists and people that came out. After it was all said and done, Uppish Media had a successful first venture into the San Pedro arts scene. But as I gathered my things and turned off the music, I couldn't help but wonder how much better we could have done if the situation was different.

In the next couple days, I heard of the confirmed cases in Long Beach and witnessed panic take over the local toilet paper economy. I realized that if the show had happened just one week later, it's likely it would have been cancelled.

If a show cancellation would have happened, I would have been pissed off, and my energy would have likely gone into fighting fear, panic, and ignorance online. Yes. Be prepared! But try to get a grip, be sensible, and don't freak out with a year's supply of toilet paper. (Maybe 8 months at max.)

A few days after the show, I saw my neighbor. He still hadn't taken his trip to Florida. I didn't ask him about it though.

We exchanged waves and went in our separate homes.

Malcolm X Gonna Give It To Ya

Note: I sent this message out earlier in February, but should have turned it into a blog post back then. Here it is now as late as it wants to be.

As we close out Black History Month, I am releasing "X.1" as an 8BitCubist print. It's a reminder of the enigmatic and controversial figure known as Malcolm X, who unapologetically fought for freedom from racism while in the crosshairs of opposition from numerous forces. His story is also an interesting one of religion and culture. I didn't want to do much else but make a simple statement with this one. 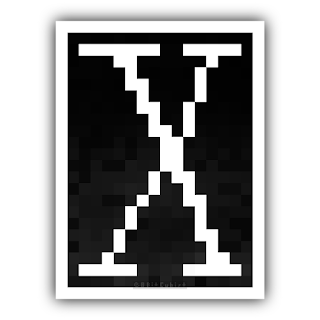 See, the game doesn't always have a happy ending, but must be played to completion to the best of your ability. It's also probably your favorite button.

Love him or not, if you haven't seen the Malcolm X film by Spike Lee, then you should have watched that by now.
You can find that link here: https://www.youtube.com/watch?v=6FtH94TiL0I


This new print, "X.1" was released on the8bitcubist.com.

I Create Nothing Real, Yet I Create So Much

I just realized that I create no physical products. I am a complete idea/concept person, and I have been for decades. I mean that in the sense that most everything I do is non-physical. In fact, I started painting with actual materials to get more in touch with "real" life.

This is not a bad thing, though. Ideas and concepts are the basis of mathematics, books, ideologies, music, art, and so much more that enable us to navigate the physical world.

It's just this weird idea that I had that my output is basically virtual.
There's something not quite real about that.