The Pod Squadron Podcast Is Here 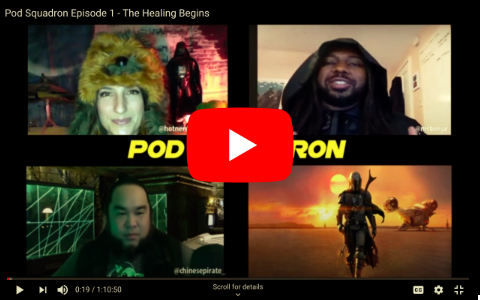 * Here's The Backstory *
Earlier this year, I was reading up on Star Wars news and finishing up the first season of The Mandalorian. I was a bit late on it, but season 2 was coming out and I was feeling good about Star Wars.
You see, I had gone through the tumultuous period known as the Sequel Trilogies Arguments. Regardless your feelings on those films, you likely thought it was a tough time to be a Star Wars fan. Things got testy. It was weird.
But I've been a Star Wars fan since...forever, and some YouTube comments and  aren't going to ruin my joy. So I kept my private Facebook group going (want an invite?), and embraced all things Star Wars again.
I suppose my enthusiasm and knowledge got someone's attention, because through this I ended up getting invited to do a podcast with some of my friends.
* Here's The Podcast *
I'm currently putting our podcast out on the different podcast channels and building something that's bigger than Star Wars. I'm hosting with theater producer Andy the Chinese Pirate and social maven Tracy the Hot Nerd Girl. We go live every week on Twitch. We also have other guests that show up from time to time. Currently, we're following the releases of The Mandalorian episodes and will continue on to other things after that. If you're keeping count, that means we've got three episodes completed.
We need your support, so be sure to subscribe on YouTube or wherever you check out podcasts.

Get Pod Squadron on your favorite player here.
- Mr Benja -
Posted by Mr Benja at November 19, 2020